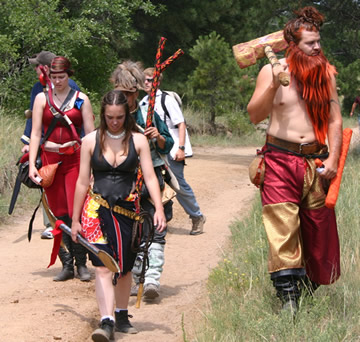 One-part improvisational theater, one-part reenactment, and one-part role-playing game, LARP (live action role playing) is an activity in which the participants actually attempt all of the actions that their characters want to perform in the game. Want to sneak past those guards? With the aid of your own physical skills, plus some in-game rules, you get to try to get by unseen. Want to talk the wizard out of his magical staff? Convince him, in character, that he should give it to you. Want to slay that red dragon? Take your sword and attack it. IFGS mixes your real-world abilities with fantastical skills and spells to allow you to live out a new adventure every time you play.

IFGS games involve a varying amount of mock combat situations. The following discussion does not cover combat in detail, and you should read the rule book to better understand how the combat system works. Most IFGS chapters have weekly weapons practice and they welcome novices.

All weapons are foam-padded, and must be approved by an IFGS Safety Officer before they are allowed in a game. The most commonly used weapons are padded swords, staves, simulated bows and beanbags (representing thrown weapons).

Each of these weapons does a defined amount of damage with a successful hit. Damage that a character does depends on the level and class of the character. Hits to the head, throat, hand, or groin area are not allowed at any time, but hits virtually anywhere else on the body are permissible. 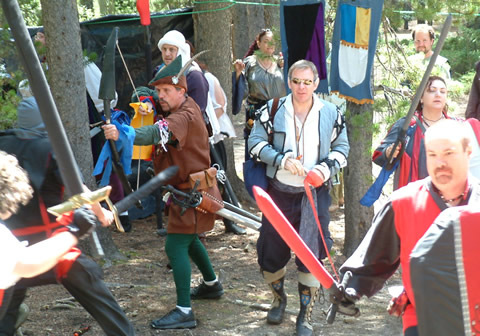 Most of the character classes are allowed some kind of armor protection in the game; however, the armor isn’t actually worn, but is indicated by wearing a small square of colored cloth. Leather, chain mail, and plate mail are used, and offer different degrees of protection against damage. Some players create elaborate light-weight costume pieces that represent their character’s armor, but any heavier metal armor is not recommended and may not be allowed in-game for safety reasons.

Each character has a fixed number of life points, depending on their level and character class, and a character remains “alive” (in a game sense) until they reach zero life points. Life points are recoverable in many different ways within the game system. If a character “dies” during a game, which is a rare occurrence, they have several options, including following the team around, or starting a new character.

A character is given a certain number of spell points for each level of experience. New spells become available with each level, with varying spell point cost per spell. A character who is a spell caster is required to take a set amount of time for their casting. This is followed by the name of the spell, the effect of the spell, and the target of the spell. Spells can cause a target damage, but many spells are also of a healing or informational nature.