Imagine yourself as a fighter, wielding a broadsword to win your way free of enemy warriors. Or a wizard locked in a mystic combat. Perhaps you have pictured yourself as an infamous rogue, slinking into a dragon’s treasure cavern. This is the world of IFGS gaming, where you can roleplay anyone you want to be for a day. 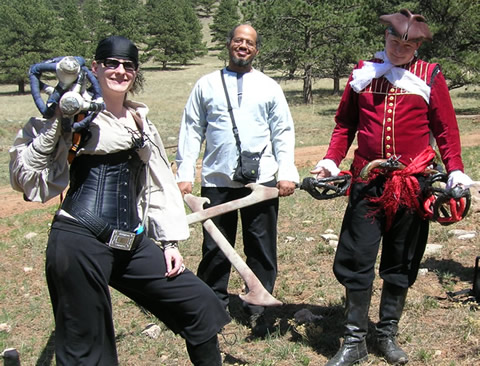 The International Fantasy Gaming Society (IFGS) is a not-for-profit organization created to run safe, live-scale, outdoor fantasy games. If you like fantasy, science fiction, or heroic games, you will enjoy gaming with us. The IFGS has a live-scale fantasy gaming system with mechanisms for fighting, spell casting, lock picking, and other skills. Mix these rules with your own abilities, and you’ve got a recipe for a fantastic adventure! The adventurers who travel with us encounter hungry dragons, sage wizards, brutal trolls, rotting undead, as well as more mundane opponents. They also encounter aristocratic kings, backstabbing queens, honorable damsels, knights in distress, brutal amazons, fae, elven folk, and stout dwarves.

The IFGS is one of the oldest live action role-playing organizations in the United States and has recently celebrated it’s 35th Anniversary! Begun in 1981, the organization started as a group of friends getting together to play games in the mountains near Boulder, Colorado. As the membership spread to Dallas and other locations around the country, the need for a national organization became evident. Inspiration for the Society came from the Dream Park novels written by Larry Niven and Steven Barnes. With their permission we adopted the IFGS name from the organization in their Dream Park novels. Eventually, both Niven and Barnes would participate in several IFGS events. 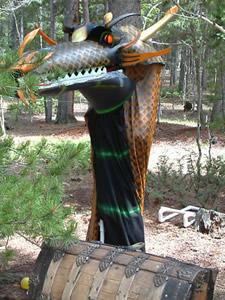 IFGS games emphasize opportunities for our members to utilize their own imagination, either by writing a story, playing out a role or by helping create an environment through settings, props, or special effects. Our games are usually team adventures, where each team is competing against the story rather than against other players. Games may take many forms but the most common is a `line-course’ adventure held outdoors somewhere. The teams follow a linear course through the game scenes, dealing with whatever they meet on the way. Plots range from simple to very complex, with a variety of physical and mental challenges to be overcome while completing the game. Games are rated based on the challenge of these elements.

Unlike pen-and-paper or tabletop gaming, our emphasis is on doing what your character wants to do, within safe limits. From ropes courses to actual river rafting, our games give players opportunities to actually get involved in the adventure. But what if you’re not interested in hiking up a mountain or swinging a sword? There are plenty of roles in most of our games that do not require physical exertion. Additionally, room-based games offer many opportunities for intrigue and roleplaying.

The IFGS runs a simulated combat fantasy environment with an emphasis on episodic game content and serial character progression. You can play a single character or create a new character each time you play. The IFGS is a great way to experience something very different from other forms of live action role playing games in an organized group with a strong history. One of the strengths of the IFGS is its community and collective history. At the same time, new players are continually welcomed into the organization. Their new ideas and experiences bring energy to the Society each season.

The central governing body, the Society provides organizational services to the Chapters and the overall membership. We support inter-chapter communication through a national newsletter, the Chainmail. The Society provides liability insurance coverage for games, and accident insurance coverage for game participants. It has a volunteer committee of members that manages the continuing evolution of the IFGS Fantasy Rules system. Currently the Society is building a national database of all game participants, their characters, possessions, and special features.

IFGS is a member-owned non-profit corporation chartered under the laws of Colorado. It is organized as a representative democracy governed by an elected seven-member Board of Directors, who serve staggered two-year terms. All IFGS members above the age of 18 are entitled to vote on and run for its Board and offices. The work of the organization is done by volunteer officers and committees selected from the membership at large. The Society Clerk, our only paid employee, maintains the membership records and processes payments and information.

Our chapters provide support services to game designers, including production assistance through Quartermaster corps and extensive props collections, financial and records-keeping management through our Treasury and Registry operations, editorial assistance through our Sanctioning committees, and advertising through Chapter newsletters and Public Relations committees.